The Z50Bus is a suggestion for a system expansion bus for 8-bit microcomputers. It’s designed to be compact, yet compatible, taking inspiration from previous standard bus layouts, and bringing it into a modern age. Being also inspired by the popular RC2014, it allows for easy adaptation of existing designs. The name of the Z50Bus comes from being originally designed to use a 50-pin connector to integrate a system around a Z80 CPU. Being a simple bus specification, it is possible to use/integrate it with other 8-bit CPUs using some glue logic.

Signal levels are 5V Single Ended, with HC TTL levels expected. So, each signal uses a single line, and an active high signal will have a High at 3.5V – 5V, and a Low state at 0-1V. The 5V and GND lines are the only supply voltages on the bus. System implementations should make sure these are noise-free, well decoupled, and dimensioned for the system current draw.

The bus uses a double-row connector scheme, with the following pin layout

This layout of the signals is relatively simple to layout for both CPU and expansion cards. Additionally, it is easily “unfolded” onto a single-row implementation, where using the first 42 pins mapped onto a 1×40 connector gives full compatibility with the bus layout of the RC2014 compatible ecosystem.

Six of the signals on the bus are included to make compatibility with the RC2014 classic bus easily available. These signals are RX, TX, and Usr0..3 (pins 37 to 42 inclusive). Designers of generally available products for the Z50Bus should take the following considerations regarding these signals:

The signal layout for Z50Bus is simplistic, and makes very little attempt at being a signal balanced and noise cancelling bus design. The bus specification itself does not indicate if a system should use buffered bus or buffered expansions (or be raw CPU signals).

Mechanical layout is not strictly bound by the bus layout and design, but to allow for card supports, the following suggestions apply.

The standard bus connector to be used, is 50-pin dual-row header pin and socket, with 2.54mm pin pitch. For expansion cards that plug into a busboard, a Male pin header with nominal 6mm pin length should be used (“standard” header, sometimes called 11mm). The bus-side connector should be a Female PCB Header Socket, with nominal 8.5mm height.

The suggested arrangement for expansion cards is to use a Right angled connector. For orientation, an expansion card laid out so the connector is on the right hand side should have pins 1 and 2 as the top pair, 49 & 50 the bottom, and the connector on the component side.

The recommended nomenclature for the sides of the card makes the edge perpendicular to the edge with the bus connector and closest to Pin 1 (A15 signal) of the bus be the Back edge. The opposite edge is called the Front. The terms top and bottom may refer to either component/pcb tracks, or to physical placement. The PCB Top layer is the component side, Bottom layer being the solder side. In terms of physical placement, the side of the card where the bus connector is located is termed the bottom edge.

On an expansion card, the center pair of pins (and thus the center of the connector) should be located 50mm from the edge closest to the connector pins 1 & 2 (back edge). Pin 26, the middle pin closest to the bus-side edge of the card, should be located 3.75mm from the card edge (bottom edge). The card should leave space for a support raiser going 2.5mm in from the back edge (closest to pins 1 & 2), extending 20mm along that edge. 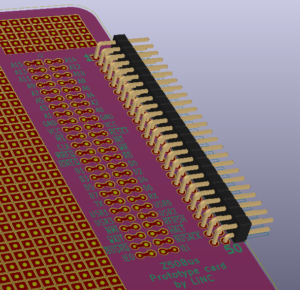 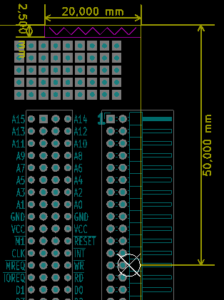 For connectors used to connect a system board primarily to a bus-board or direct attachment of a single expansion, a suggested arrangement is to use straight connectors placed on-edge, female connector on the system board (main bus) side, and male on the expansion (exp bus) side. This allows the main-bus card and the expansion-bus card to lie in the same plane, without requiring expensive female right-angle 2×25 socket headers. Host boards (i.e. SBCs and full-featured CPU boards) are recommended to use this arrangement. For these cards, the system Interrupt Chain output (the system IEO signal) should use pin 49 to connect to the IEI pin of the first slot of an expansion bus backplane.

Host/processor boards designed to plug into a bus-board the same way an expansion does, should use a standard right-angle male connector. Such cards should take special care to make sure the IEI/IEO signals are properly handled. 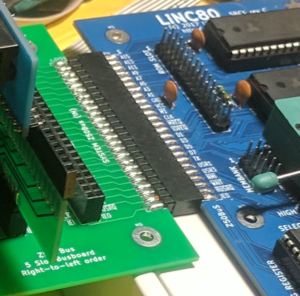 The LiNC80 SBC1 is to be counted as a reference implementation of a host system for Z50Bus host-to-expansion bus interconnect.

The LiNC 5-slot Z50Bus backplane is to be counted as a reference implementation of a Z50Bus expansion backplane. The SC128 – Modular Backplane for Z50Bus by Stephen C Cousins is the alternate reference.

The z50Bus definition has few lines reserved for interrupt handling outside IM2, and few lines for DMA and Bus Mastering. The bus is intended to provide core functionality common across Z80-based systems, with some flexibility to support other 8-bit processors. Systems that want/need to implement nested interrupts with several lines, need complex (full featured) bus mastering, or system specific lines not present on the Z50Bus need to implement these features using either a secondary system specific bus connector, or flying leads.

The pin-out used for host connectors as demonstrated by the LiNC80 SBC1 connects the system board IEO to the IEI pin of the first card connected to a system bus backplane, such as the LiNC 5-slot Z50Bus backplane. This leads to a limitation where an IM2 interrupt enabled expansion card is supported only when plugged into a backplane. Plugging such a card directly to the Z50Bus expansion connector of a host system will leave the card’s IEI line disconnected, and the system IEO output connected to the expansion card’s IEO output (creative users may find a suitable workaround, but this is not officially part of the standard).

LiNC does not set hard requirements or restrictions on I/O address space for the Z50Bus. The Z50Bus as described here is indended to be a bus specification. This means it should define signals, connector and physical requirements, but should be careful about defining system requirements or address space allocation unless it is required to make the bus work. Definition of I/O address requirements is a task for the system integrator, i.e. the one who chooses to implement the bus on system- and expansion boards.

However, to retain broad compatibility between devices from different implementers, a general suggestion for the use of the relatively limited I/O address space has been outlined in collaboration with the first integrators outside of LiNC.

Stephen C Cousins has put together a spreadsheet with most known devices (as of Jan 2019) of both RC2014 and Z50Bus. Mr. Cousins was the first implementer of the Z50Bus after LiNC published the specification, and was also central in the discussion about the general recommendations on address space use. Documentation about Mr. Cousins implementation is located on his page about the Z50Bus, located at https://smallcomputercentral.wordpress.com/z50bus-4/

Being a bus for 8-bit microcomputers designed after 2016, the number of potential CPU’s relevant for new designs is limited. Currently only the Z80-family and the 65×02 family of CPU’s have parts still in production. Because of this, only a 65×02 adaption of the bus is suggested here.

Some of the Z80-style signals need to be synthesized. 65×02 uses memory mapped IO, so the IOReq signal needs to be generated by the CPU card/system when a request is made to the 65×02 IO address space selected for the system. The Mreq signal will then be a simple invert of the IOReq signal. An equivalent function of the WAIT and HALT signals may be found on the 65×02 RDY line. A diode split of the function may be appropriate. The SYNC signal can be adapted for the M1 signal function, if the INTAck feature is considered in the implementation.

There exists a 65c02 CPU card for the RC2014 system, this should be seen as the reference implementation when adapted to Z50Bus layout for the basic signals. See http://ancientcomputing.blogspot.no/2017/05/a-6502-cpu-for-rc2014-part-1.html. It is suggested that 65×02 based systems using the Z50Bus indicate clearly that not all expansion cards designed for a Z80 native Z50Bus system will be compatible.

The products listed under this heading are the products made available by LiNC to support development of Z50Bus based systems.

A 5-slot back-plane with pass-through connections is available. The back-plane is designed to accept five expansion cards, and to connect to a host system using a male Z50Bus connection on the right side. The pass-through connector is placed on the left side, allowing for daisy-chaining of multiple back-plane cards. This card is fully passive, so any buffering needs to be done on either the host system, or on the expansion cards. 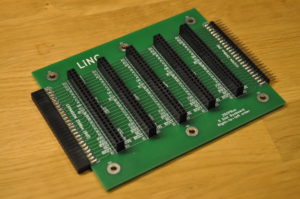 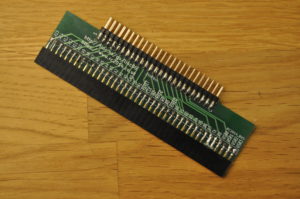 This is a perf-board style prototyping card, with a full Z50Bus connection conveniently brought out on easily available pads. 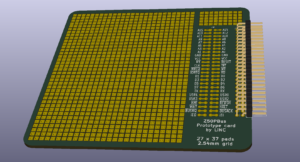 LiNC does not expect to be able to track all Z50Bus devices. Without including the above mentioned productrs, this list includes devices where LiNC has been involved, either designing, providing information about the implementation, or verified the implementation.